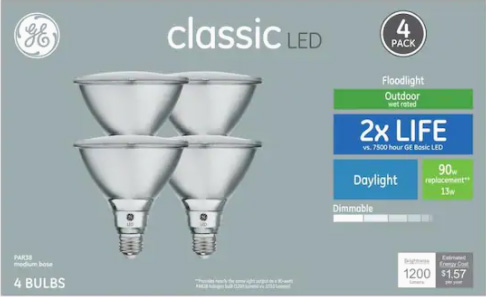 The average residential Xcel electric bill in Denver is $78.01/month. Of that maybe 3 to 5% of represents use of lightbulbs. But the remaining 95% of the bill is for other electrical appliances.

Sure, you will cut your electrical bill by switching to LED lightbulbs and LED fixtures…a little.

LEDs (Light Emitting Diodes) use semiconductors to convert electricity into light. Energy Star-qualified LEDs use only 20-30% of the energy traditional incandescent bulbs do AND they last 8 to 25 x longer, according to Energy.gov. The downside is that the price of admission can be a showstopper with LED bulbs being significantly more expensive than traditional incandescent bulbs.

Another benefit of LEDs is that they last longer. It’s not unusual to find LED bulb packages that declare “LASTS 13 YEARS.” You mean I don’t have to climb that ladder again until I’m 80 years old? I’m in for LED.

Energy.gov reports that Energy Star-rated LED bulbs use at minimum 75% energy and last 25x longer than incandescent. The math is astounding. By 2027, widespread use of LEDs could save 348 TWh (compared to no LEDs in use) of electricity. That’s the equivalent annual electrical output of 44 large electric power plants (1000 megawatts each), and a total savings of more than $30 billion at today's electricity prices.

But if you’re only going to save under $5 a month using LEDs if your monthly electrical bill runs according to average of $78/month, when does the return on investment begin to show up?

It shows up when you replace major appliances. Energysage.com reports that an Energy Star-certified clothes washer uses 40-50% less energy and 55 percent less water than standard wishing machines. The savings on this appliance alone can add up to $50/year.

Foxbusiness.com reports that 14% of home energy use goes to heating water, 12% to lighting, 13% to refrigerators, washing machines, dryers, and dishwashers. Replacing appliances a dozen years or more old CAN save significantly on electricity because an energy-efficient major appliance uses half the energy of a 12-year-oid relic.

Ask Allstar Electrical what you can do with replacement electrical service, changing outlets, wiring and light switches plus wiring to bring your outdated electrical fast-forward to 2020.