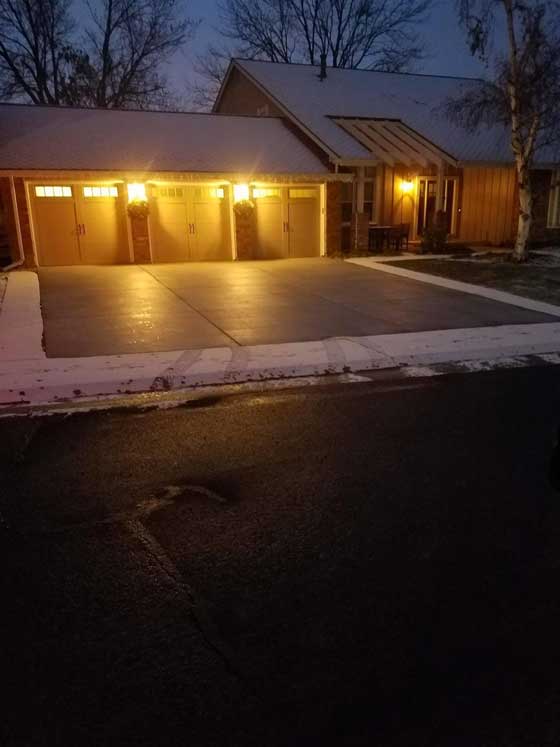 It’s mid-summer, and yet it’s time to seriously consider a Snow Melt System…that is if you want it installed before the first snow of the season.
Snow Melt Systems come in a variety of options: from radiant in-floor heating to mats that are stretched across a driveway. The cost of installing such a system is based on the square footage of the snow melt functionality.

Cost aside, NOT having to shovel one’s driveway could save a life.

Health.Harvard.edu reports that about 100 people — mostly men — die during or just after shoveling snow each year in the United States. Many more are admitted to the hospital with chest pain or other heart problems after shoveling. Researchers correlated admissions to the hospital and deaths due to heart attack the day after it snowed in Canada during the years 1981 to 2014. This included more than 128,000 hospital admissions and more than 68,000 deaths due to heart attack.

It might look like there’s not much to shoveling as a science. But it’s a task that’s governed by city and state laws. Homeowners are required to shovel the public sidewalks in front and on the side of their homes within 24 hours after the snow stops falling or risk being fined. Fines in the City of Denver range from $150 to $500 to $999 for the fifth violation. Plus, the Colorado Department of Transportation cautions homeowners that when shoveling snow from their driveway or sidewalk that they not deposit the snow into the street. That too is illegal and homeowners can be fined.

Having to hoist a shovel full of snow to the sides of the walk and driveway complicates the task and actually risks back and shoulder injury. Using a snow blower, even the smaller types intended for private walkways, becomes more difficult when the snow must be deposited at the sides of the driveway vs. at the end.

So what’s a person to do?

Consider a Snow Melt System. A word to the wise, start consider it now so that it can be installed before the first snowfall.

Allstar Electrical has installed Snow Melt Systems of various types for customers in Colorado—residential and commercial.

Snow Melt Systems are either electric or hydronic. Electric snow melting systems are designed for small to medium sized projects for your residence or commercial building. It’s the simpler type to install and the least expensive. And it can be installed under concrete, pavers or tile.

Hydronic systems melt snow and ice by circulating a glycol solution fluid through tubing that is either embedded in concrete or installed beneath brick pavers. The heating element in a hydronic system is a closed-loop tubing made of a flexible polymer (typically a cross-linked polyethylene) or a synthetic rubber that circulates a mixture of hot water and propylene glycol (antifreeze), much like what’s used in a car radiator. Hydronic snow and ice melt systems can be installed in practically all types of outdoor surfaces.

Whether you’re a believer in Global Warming or not, weather stats substantiate that the May snowfall in the Mile High City has roughly doubled since 2000. Findings issued on May 4, 2019 from Denver's old Stapleton Airport observation site show the May snowfall has measured 2.0 inches on average in the last two decades, compared to the 1981-2010 average of 1.1 inches. The same is predicted to continue into the decades ahead.

Contact Allstar Electrical today for an estimate and hang up your shovel for good.