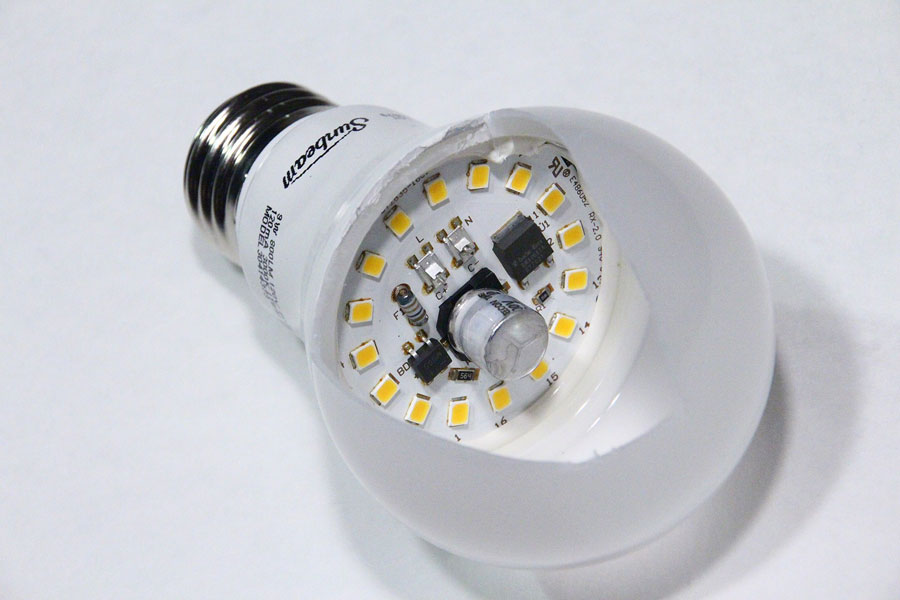 Don’t Get Burned by Cheap LEDs

This image was made by Loadmaster (David R. Tribble)

Unlike incandescent and fluorescent bulbs that pass current through a filament or gas-filled tube, LED lights are devices that rely on several components to operate. And each of these pieces contribute to the performance and longevity of the bulb.

What’s in an LED Bulb?
An LED light bulb has three basic operating parts: the light-emitting diodes (LEDs) themselves, a circuit board with a transformer, capacitors, and other components, and the bulb case that houses the circuit board and LEDs.

Those components can vary from basic to complex, depending on the type of lamp. So-called “smart” bulbs can have multiple arrays of LEDs controlled by a radio frequency receiver that sends signals to a circuit board to change light color, intensity, and turn on and off.

Keeping Cool
You probably know that LEDs use a lot less electricity than other bulbs to produce the same amount of light. That also means they generate a lot less heat from wasted energy. But it doesn’t mean they don’t generate any heat, and that heat can cause the sensitive components of the device to fail prematurely. More often than not, the LEDs themselves are perfectly fine, it’s the other parts that go bad.

The solution is to dissipate that heat via a heat sink and cooling fins incorporated in the case housing. Large industrial lamps may even include cooling fans.

Quality Counts (and Costs)
The quality of a product is a function of design, components, and workmanship. Each of these attributes comes with an associated cost and those costs largely determine the price of the product.

Fortunately, the acceptance and growth of LED lighting has caused prices to drop dramatically since the first household LED lamps were introduced just a few years ago. Today, the LED lamp market has grown to nearly $80 billion and is projected to double in the next five years. That’s allowed prices for a basic 800-lumen (60w equivalent) bulb of good quality to fall into the $2-3 range. That’s quite a bargain considering that a typical domestic LED bulb has an average life of 15 years when operated three hours per day.

You Get What You Pay For (usually)
Better quality bulbs typically cost more, same as any other product. And extra features like “smart” capability can add up. At the same time, low-cost bulbs are available if you’re willing to trade price for performance.

Choose the bulbs that meet your needs and your budget. But look at both the manufacturer’s and the store’s warranty and exchange policies. And don’t be fooled by a 15-year guarantee on the LEDs. They’re only one component of the lamp, and as we’ve already noted, it’s the other parts that are more likely to fail. Shop at stores you trust and that have staff that’s knowledgeable about LED lighting.

Want More Information?
This article on the Allstar Electrical Services blog gives an in-depth look at the many considerations in choosing LED lighting. Then let the pros at Allstar show you how LED technology can be used in your home or business. We’ve served Colorado’s Front Range for over 20 years and are top-rated by the BBB and Angi’s Home Advisor. We provide a full range of residential, commercial and facility electrical contracting and maintenance services, so visit our website or call (303) 399-7420 to learn about the many ways Allstar Electrical Services can add power to your home or business.